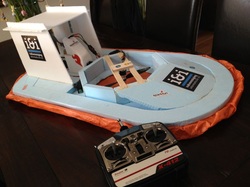 A hovercraft, also known as an air-cushion vehicle or ACV, is a craft capable of travelling over land, water, mud or ice and other surfaces both at speed and when stationary. Hovercraft are hybrid vessels operated by a pilot as an aircraft rather than a captain as a marine vessel.

Hovercraft use blowers to produce a large volume of air below the hull that is slightly above atmospheric pressure. The pressure difference between the higher pressure air below the hull and lower pressure ambient air above it produces lift, which causes the hull to float above the running surface. For stability reasons, the air is typically blown through slots or holes around the outside of a disk or oval shaped platform, giving most hovercraft a characteristic rounded-rectangle shape. Typically this cushion is contained within a flexible "skirt", which allows the vehicle to travel over small obstructions without damage.


Materials YOU WILL NEED: 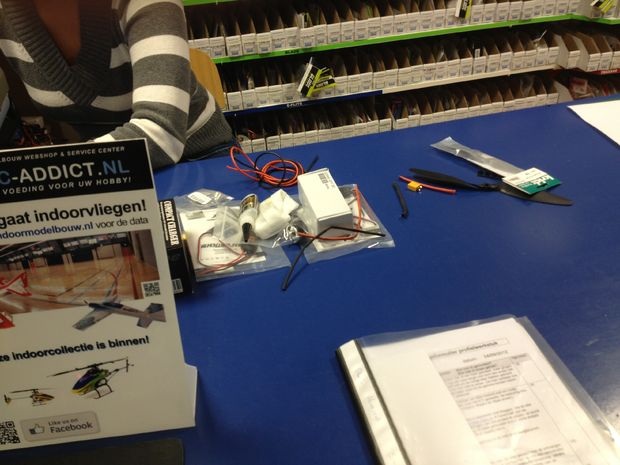 Liftmotor; Emax BL 2215/25 950KV Outrunner Brushless Motor
(search for it on google, it's not on HobbyKing, but there are many other sites selling this motor. You can use another motor as well, same goes for the thrust-motor.)
Propeller:
http://hobbyking.com/hobbyking/store/__10394__SF_E_Prop_10x3_8_254x96_5mm_w_Adapters_Black_5pcs_set_.html

ESC's:
2 x HOBBYWING SKYWALKER 20A ESC
(search for it, it''s on different sites)

Silicone wires (one black and one red)
http://hobbyking.com/hobbyking/store/__9680__Turnigy_Pure_Silicone_Wire_16AWG_1mtr_BLACK.html

3mm Heat shrink tube (one black and one red)
http://hobbyking.com/hobbyking/store/__3831__Turnigy_3mm_Heat_Shrink_Tube_BLACK_1mtr_.html

XT60 connectors:
(for connecting your your battery to the wires)
http://hobbyking.com/hobbyking/store/__10414__Male_XT60_connectors_5pcs_bag_GENUINE.html

Almost there... the final things you need:


For the body I used styrofoam (XPS)

Polyethylene lightweight tarp is used for the skirt.

Glue for your foam boards

Enough materials, time for the next step! 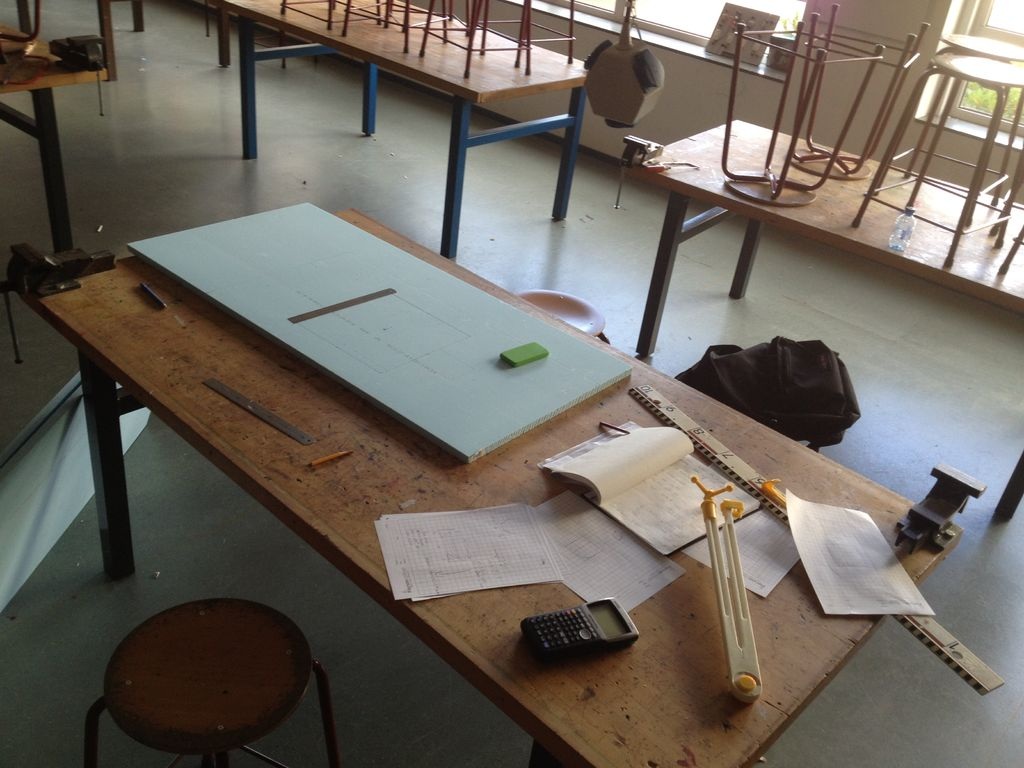 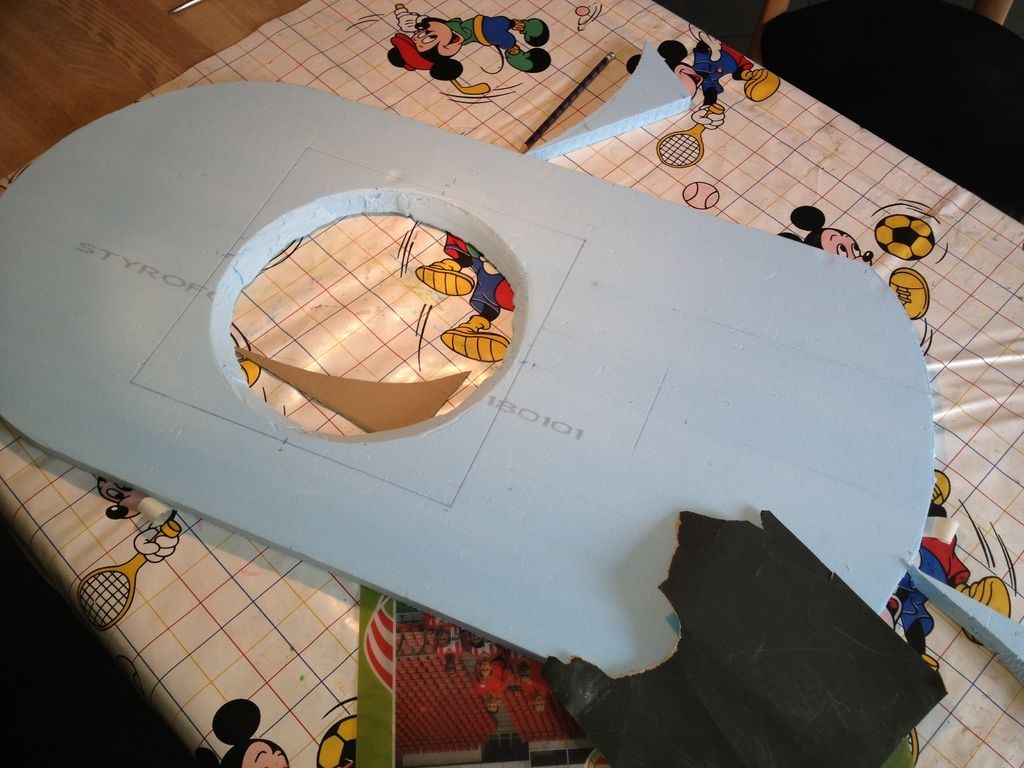 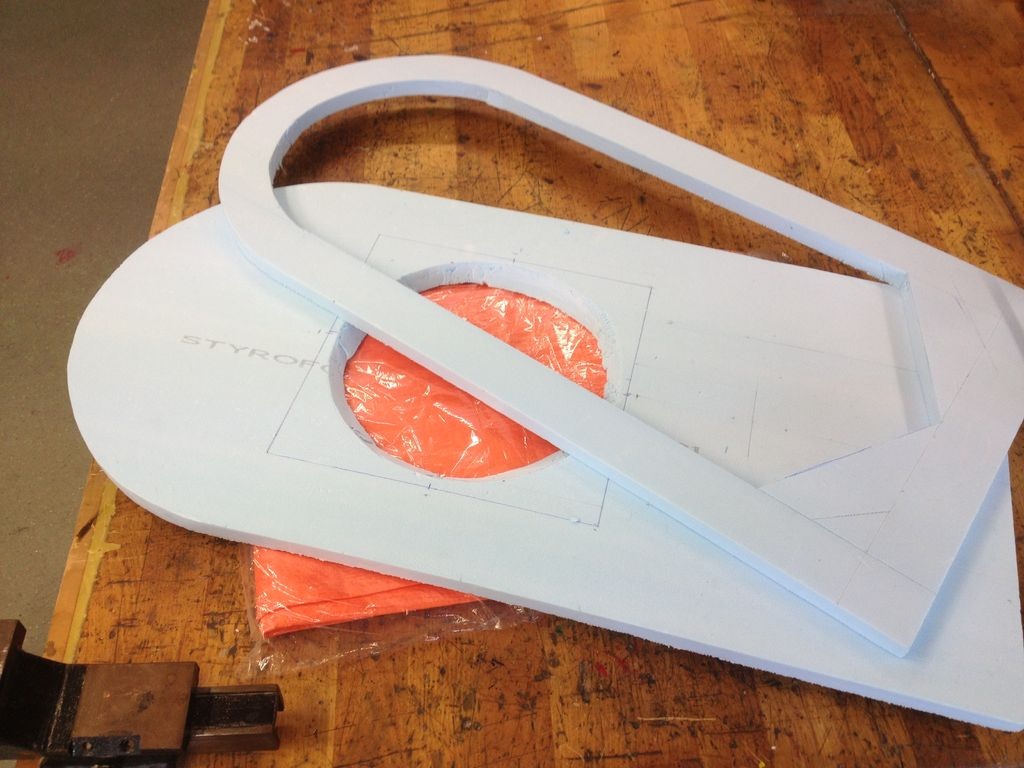 The next thing to do, is cutting your foam boards. As said, I used styrofoam which is easy to cut with a stanley knife. After cutting it you can smooth the edges using sandpaper. No hot wires needed!

- Make the front of the boards in a round shape as on the image.

- After that, cut a circle in the middel of one board. Make sure the hole is exactly in the middle of the widht. It has to be a bit more at the front (you'll need your space at the back of the hovercraft), but not too much at the front! And it's better if you hold your knife in a angle, so that the air will flow to the center.

- Cut the inside of the other board out. Keep a border of 6 cm.

- You can round the back of the boards as well, see the image 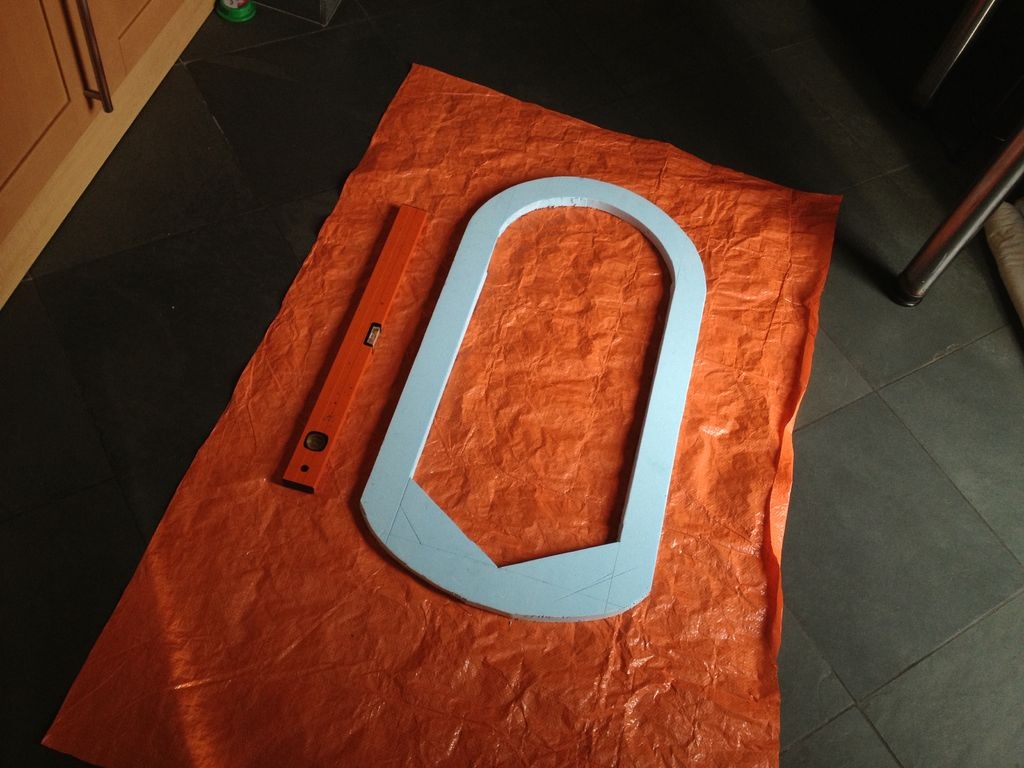 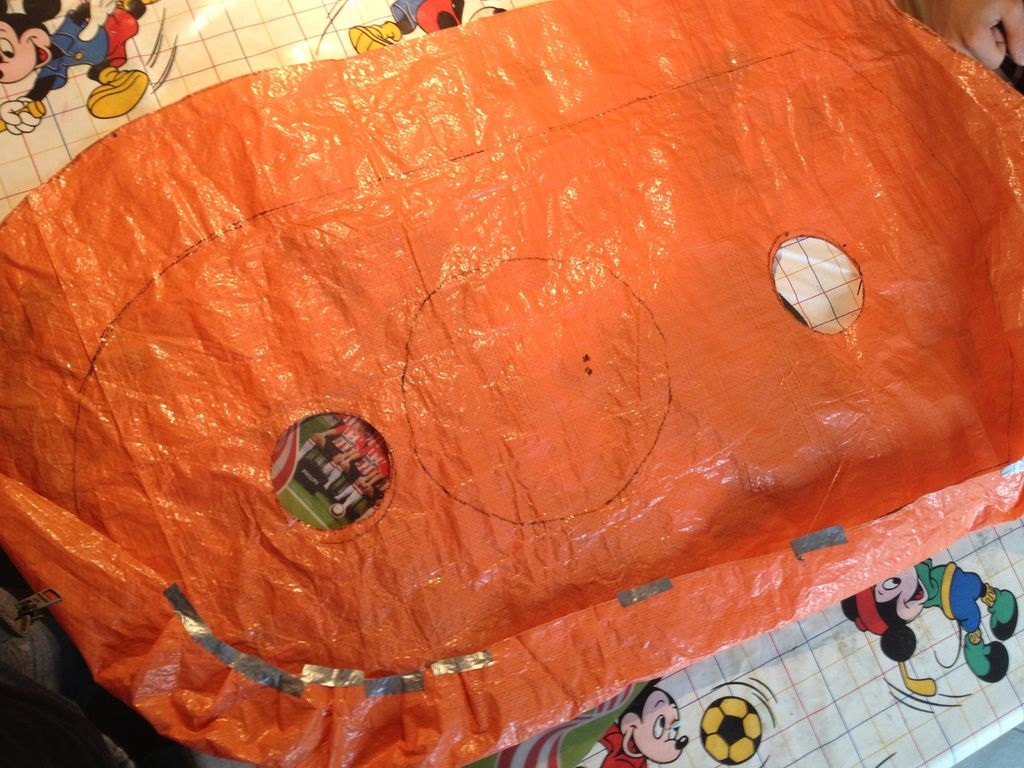 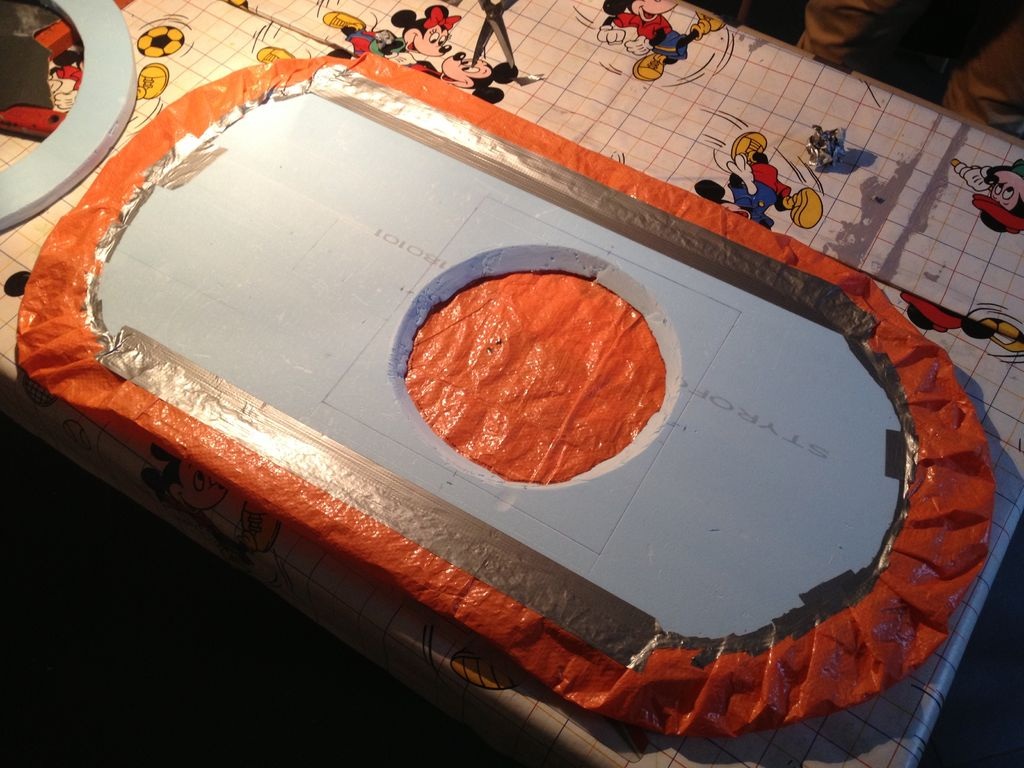 Time to add the skirt to our boards. Get your blanket and place one of the boards on it. Mark where you are going to cut the tarp. Keep some space between the edge of the board and your marks. You'll need this to create some flexibility for the skirt and you have to fold the edges 1-2 inches over the board (to create an overlap).

- Cut some holes in the skirt, I've cut two holes in the middle spread across the lenght. Start with litlle holes, after testing you can always make the holes bigger, or make some more holes.

- Once you have the skirt ready, lay down your base board on it. Fold the edges of the skirt and tape them on the board. You can use duct tape for it.

- After you did this take your other board and glue it on the base. I used some foam adhesive glue for it. (Don't know how it's called in the U.S.) Now you got the blanket jammed between the two layers, and it should be staying there. It's also looking better and it gives the body of your hovercraft more solidity! 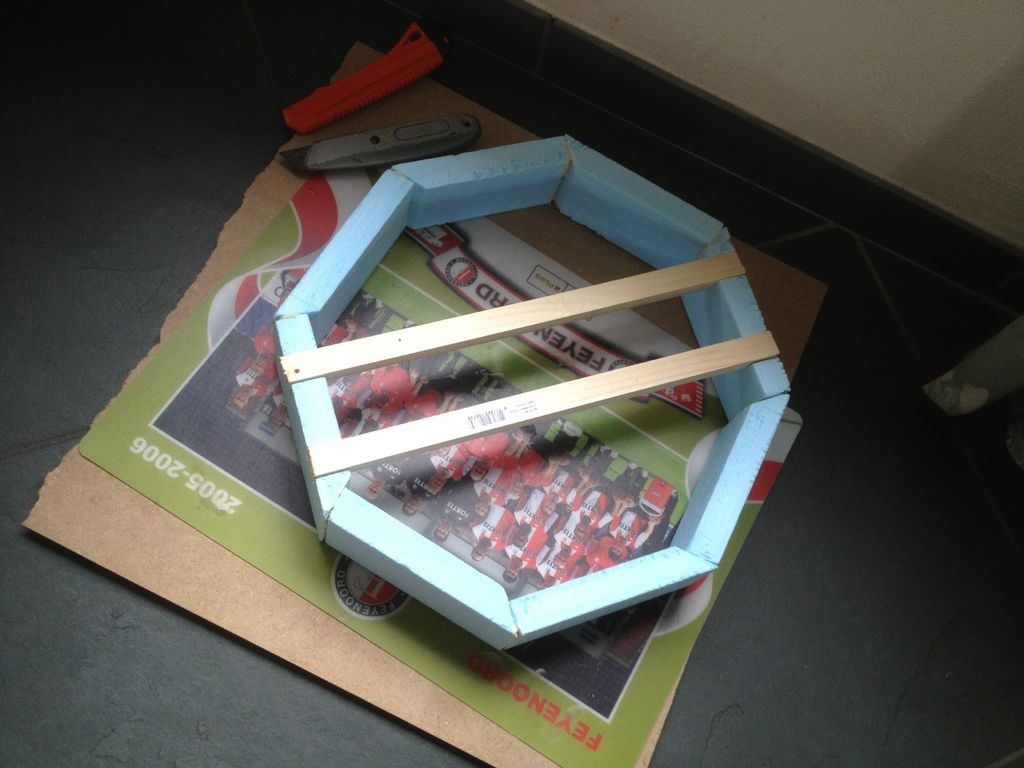 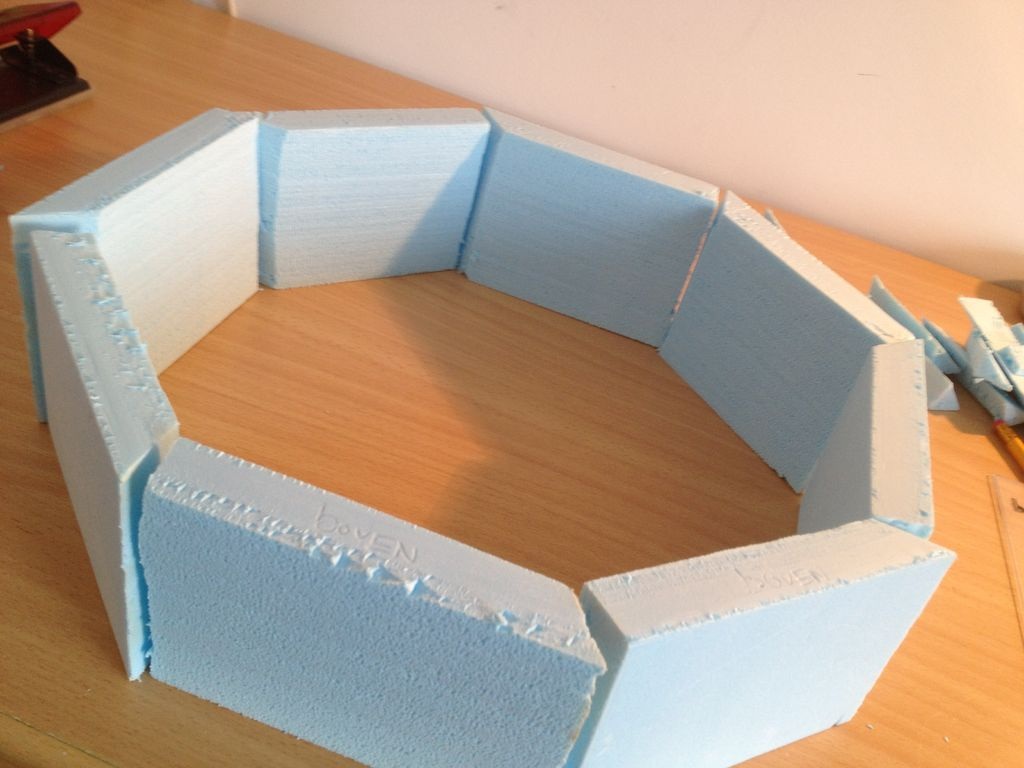 To create a lift duct, I decided to make an octagon out of foam pieces. However, it's better to use a perfect round lift duct (open cylinder). If you can get one, use it! Mind that it has to be lightweight and that it matches with the size of your propeller. We hadn't one, so we tried to make our own with this octagon shape. For making this:

- Simply cut eight pieces of foam. (13 cm long). Cut an angle of 45 degrees on each of them, so they will form an octagon.

- Your motor and propeller will be hanging inside of this lift duct. To get your motor in the middle, use two wood spars. Cut four gaps in the foam pieces you've made, where the spars will fit in.

- Glue all the eight pieces together and place the wood spars in the gaps. First fill the gaps with glue. Make sure the spars are holded firmly, you don't want your motor flying away! 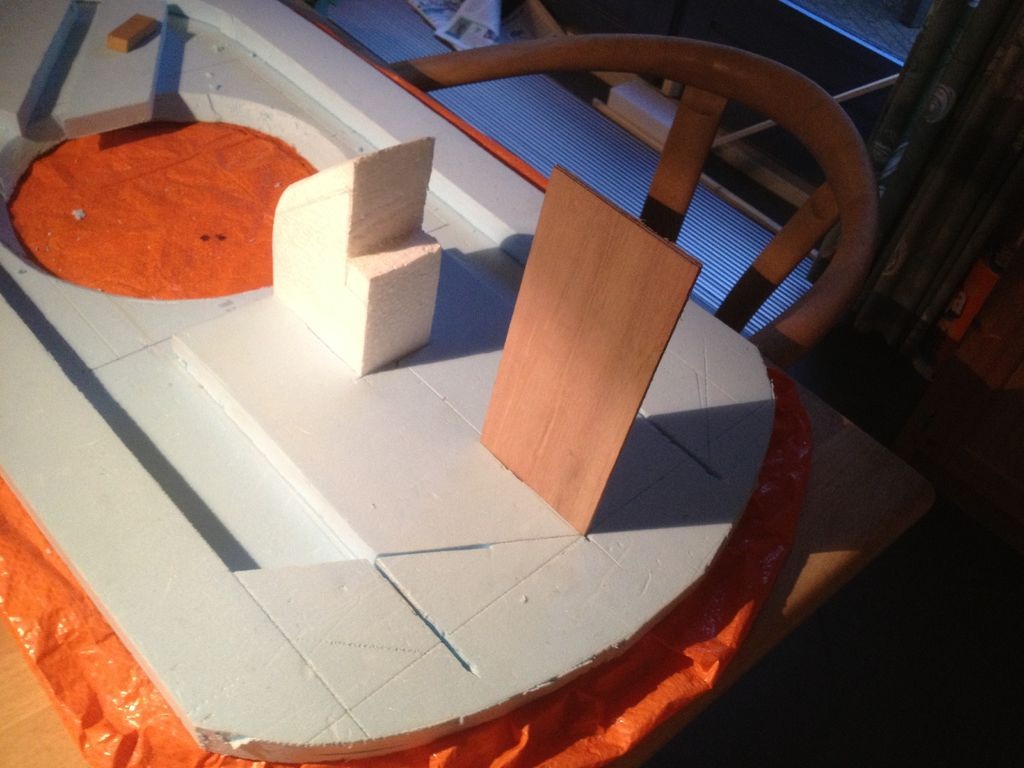 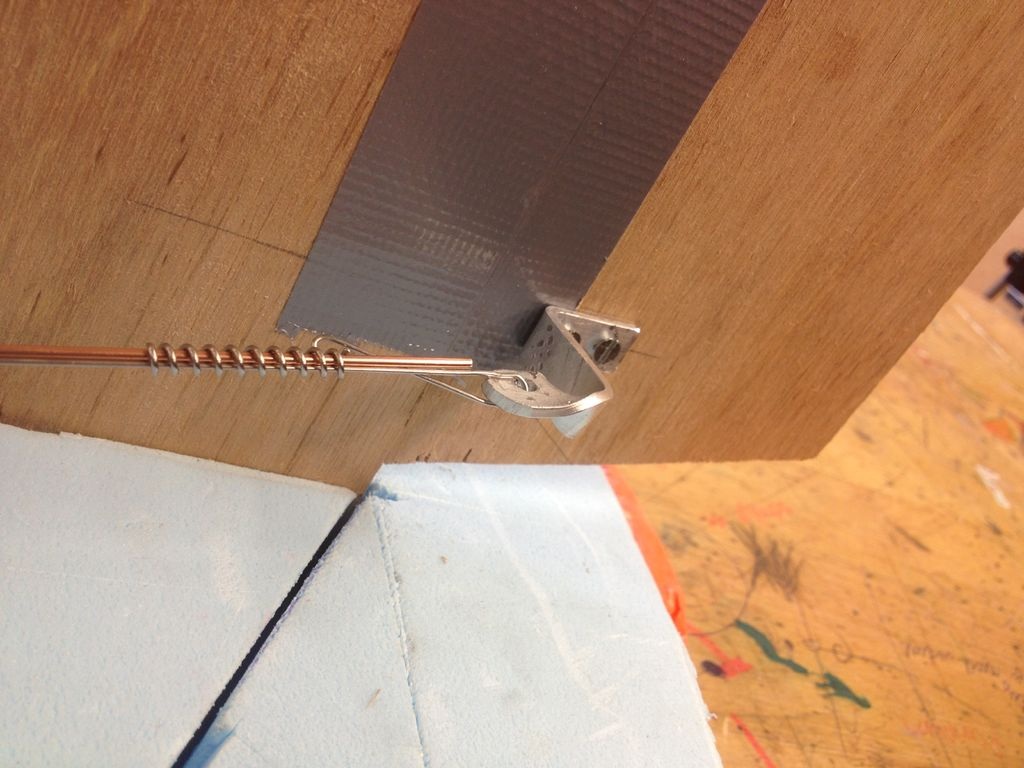 In this step we're making a motor towerfor the thrust-motor and we're going to start making the rudder.

- For the motor tower  used 5 cm thick EPP foam. (Just take some thick piece of foam). Cut the shape you see on the picture. A fretsaw is good to use cutting this foam. The motor will be standing on the flat surface facing the back of the hovercraft. The motor is mounted on a 90 folded little aluminium mount, which is screwed on a piece of wood. The wood is glued on the foam surface. (We'll come back to this later.)

- Right behind this pusher motor tower we'll be placing the rudder, as you see. Use triplex or plywood for the rudder. One part of the rudder stands in the 2cm styrofoam, the other part is hanging on this. Just connect the two parts with duct tape. Keep a little space between them to make it moveable.


As you can see, the motor tower and rudder are placed/glued in another piece of foamboard, which is glued to the base plate. I did this to make sure they are both standing stable. Later, you can also place you spoiler in this extra piece of foamboard. 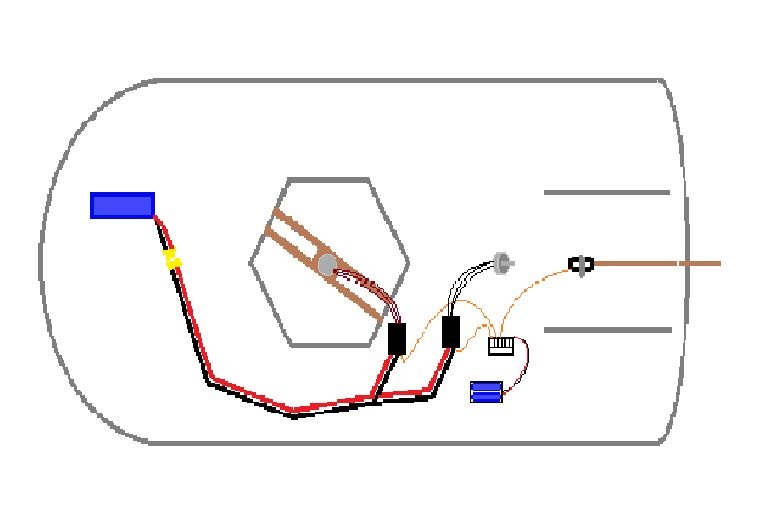 For testing the motors, you first have to solder an electric circuit to connect the battery to the ESC's and motors. Grap your materials and make the circuit as shown on the image!


- The three-colored cable from the servo can be plugged directly into your receiver. (the servo runs on the receiver-battery.)

- The three-colored cable from the ESC's can also be plugged directly into your receiver, but...
! Do not plug the red/power (probably the ones in the middle) wires from these cables into your receiver. The ESC's are already being powered by your LiPo-battery. Just fold the red wires back and cover them with heat shrink or tape. 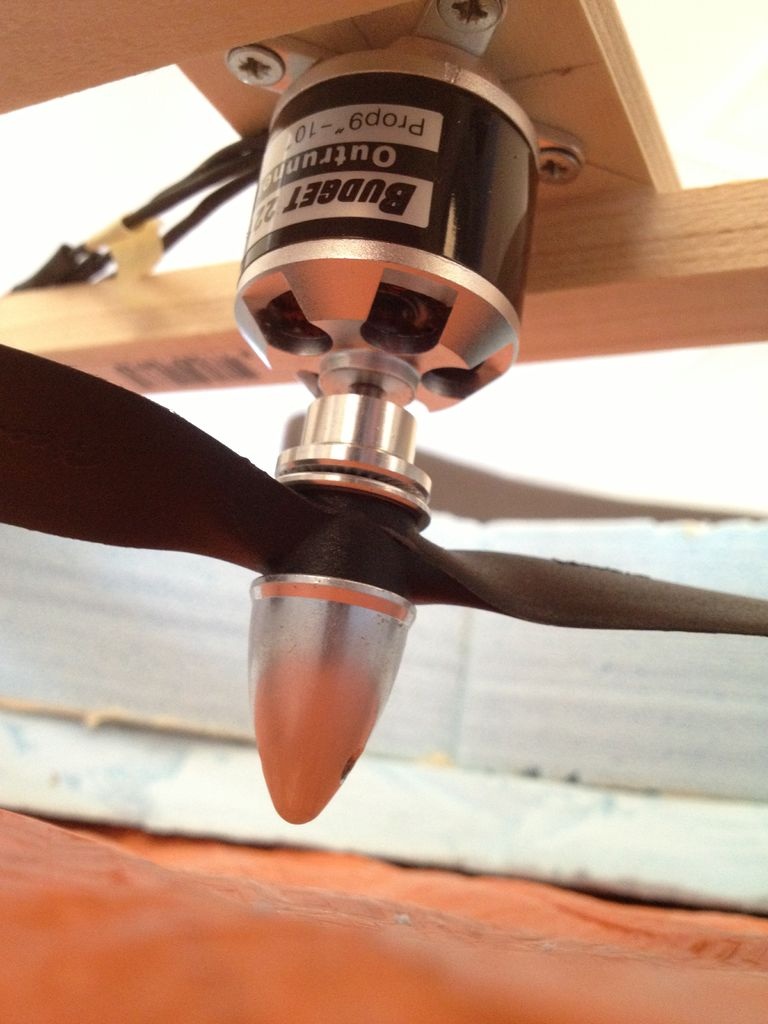 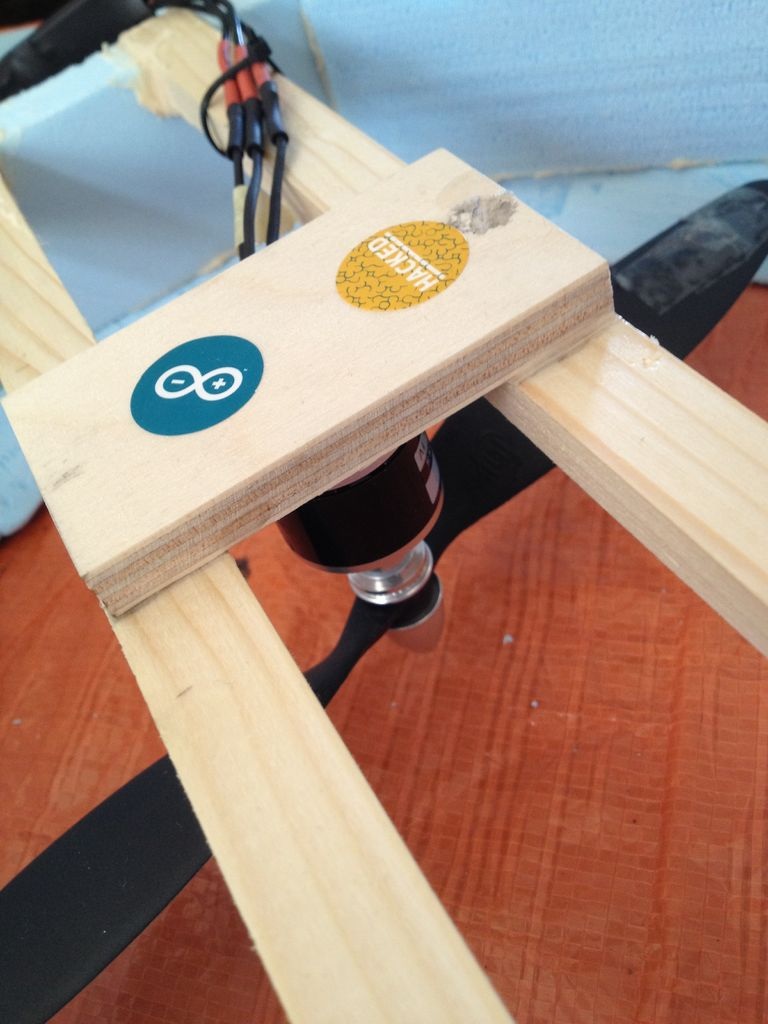 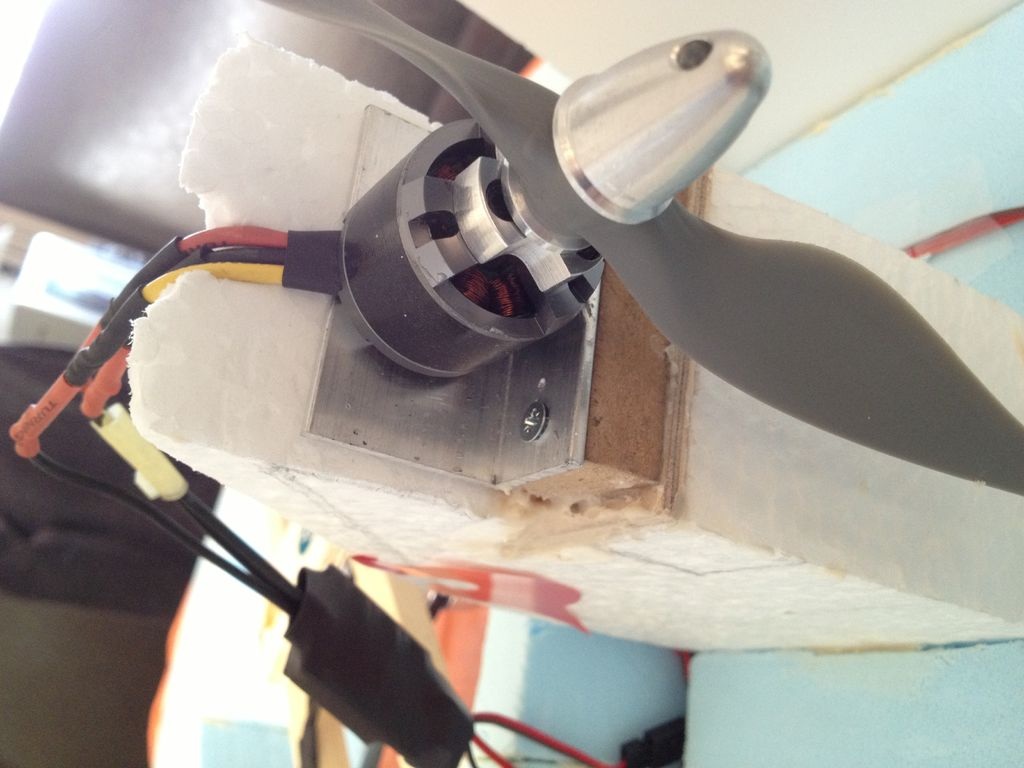 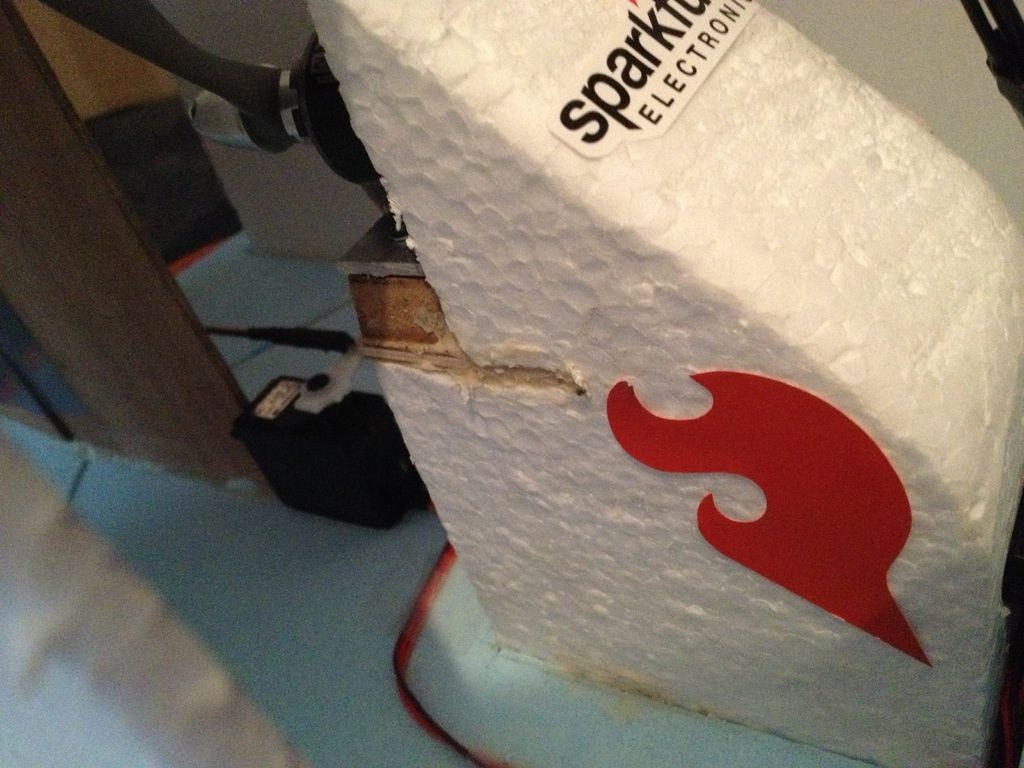 Now the circuit is soldered, and the lift-duct and motortower are placed, it's time to assemble the motors on the hovercraft.

- For the liftmotor: mount the motor on a light piece of wood. Glue this piece on top of the wood-spars, use wood glue. Make sure the motor/propeller is exactly in the middle of your lift-duct.

- Mounting the thrust-motor is a bit more complicated. Let's take a look at the picture. As said, the motor is mounted on a 90 folded little aluminium mount. I made this mount by my self.

> Take a 90 folded aluminium plate.
> On one side, drill holes, so you can mount the aluminium plate on a little piece of wood. (which you can glue on the foam)
> On the other side, drill littles holes (very precisely) where you are mounting the motor.
> Mount the motor with short screws, or you will damage the inside of the motor!
> I glued another piece of triplex wood under the first little wood block. I inserted half of this piece of triplex in the motor-tower. (see last pic). I did this to make sure the motor was standing stable enough.

After mounting the motors, test them! : 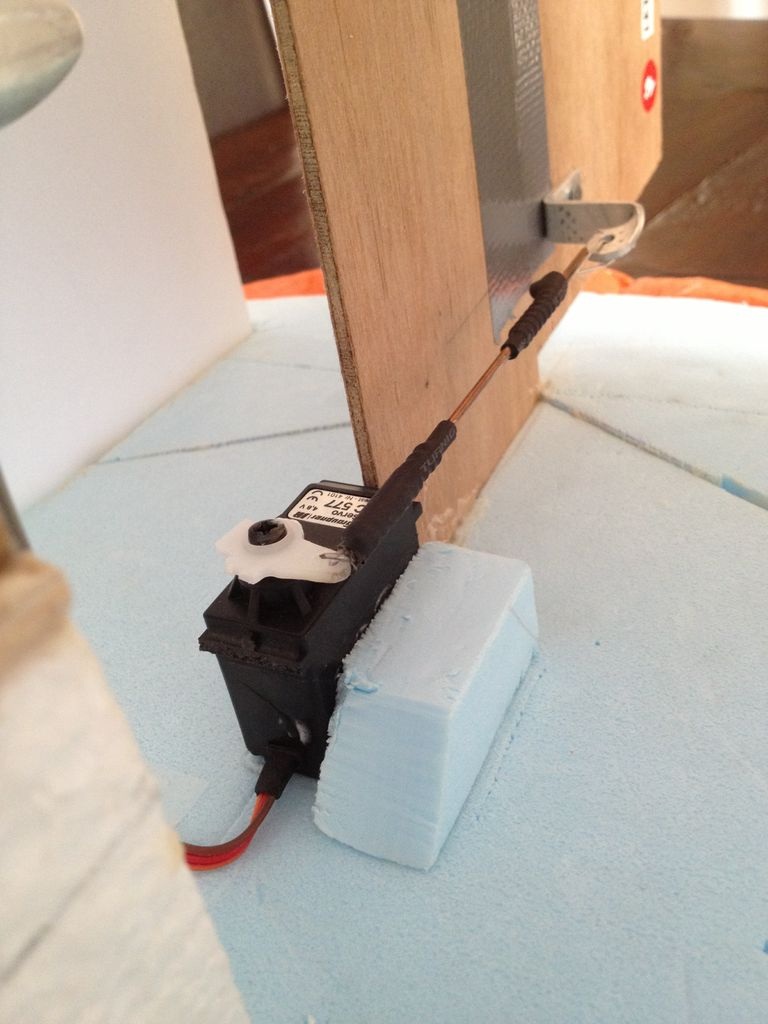 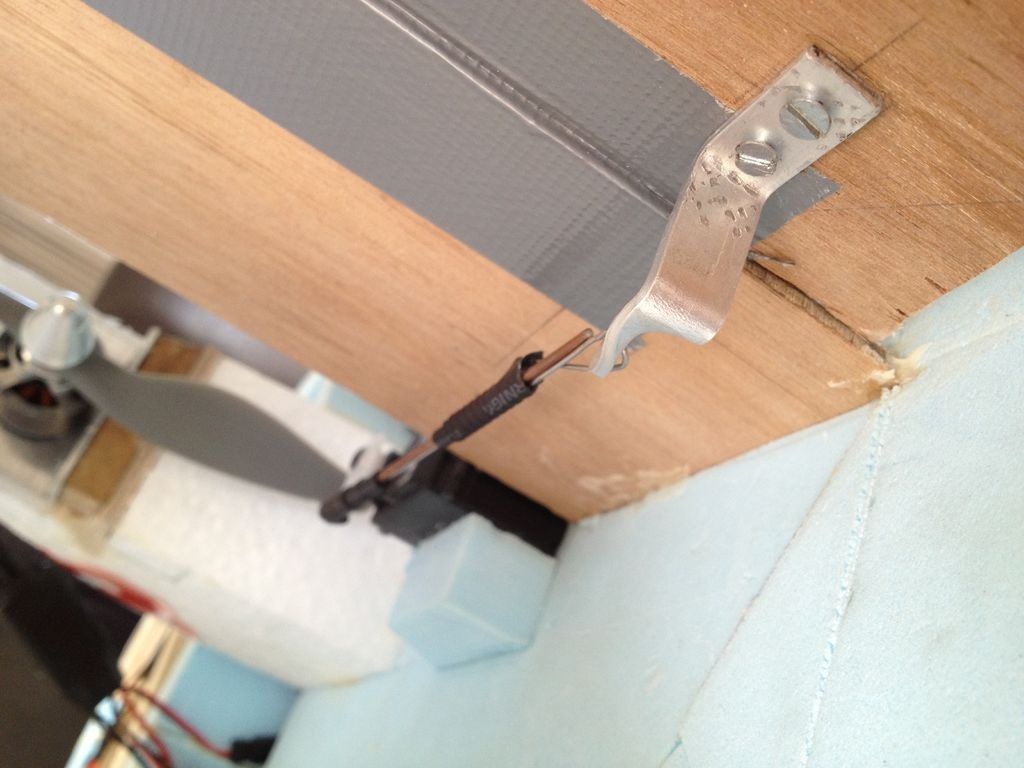 As you can see from pictures that mounting of servo is too easy
There's one more motor to mount. This is the servo-motor which has to be connected to the rudder.

- Place the servo right behind the not-moveable part of the rudder. Glue it on the foam. Be careful with glueing on foam. Some kinds of glue will attack/damage your foam. I used BSI Super Gold Plus foamsafe glue. I really recommend it. Glue down a little piece of foam to the side of your servo for more stability.

- Now you have to connect the servo arm with the rudder. You can use pushrods for this, but I decided to make my own. I used a piece of aluminium screwed on the wood (as a horn), and a little rod. If the rod bends when turning the servo, add another wire on the rod to make it stronger.

When you have the servo and thrust-motor mounted, you can make a spoiler as I did. Again, use light material. Depron, for example. 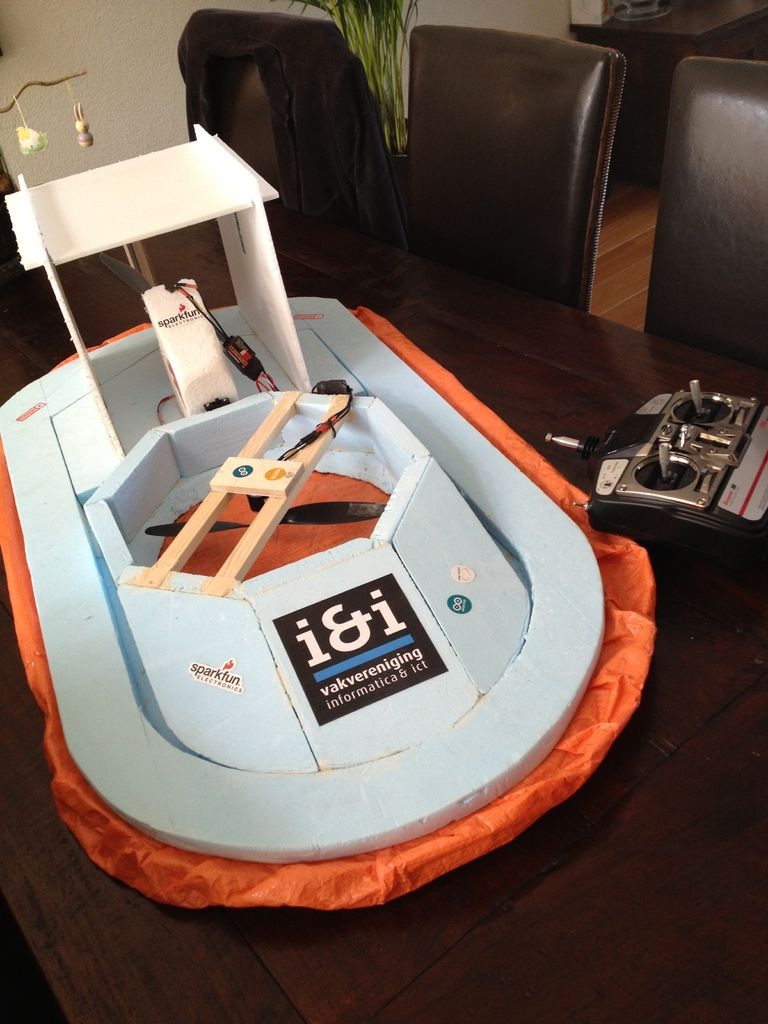 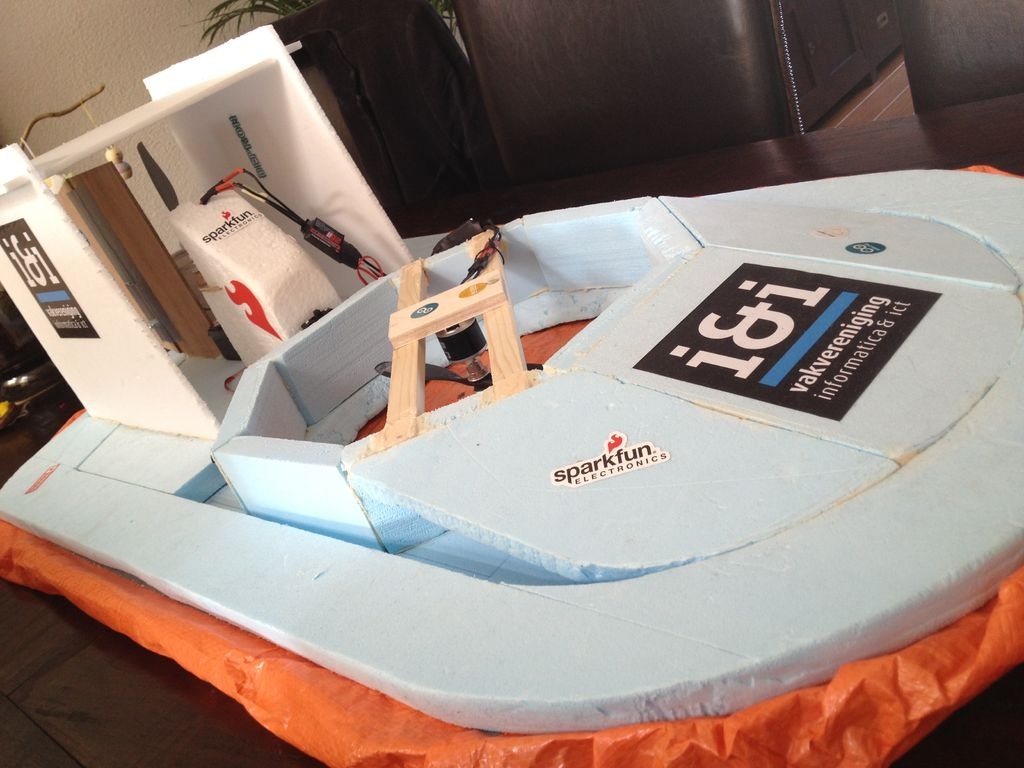 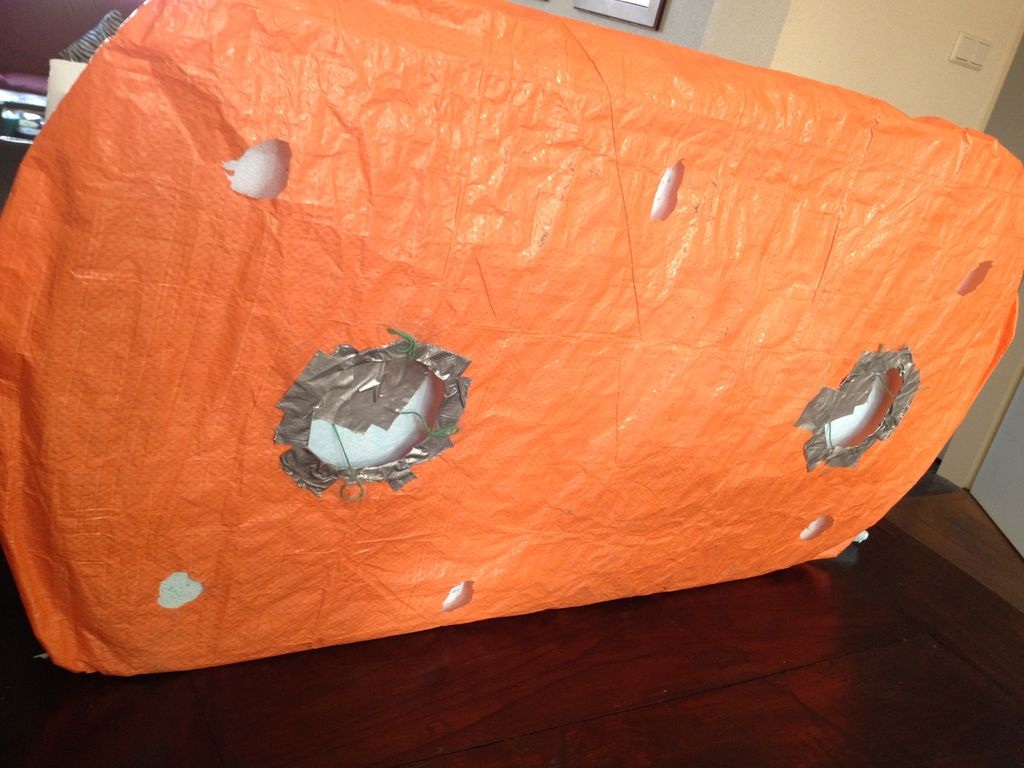 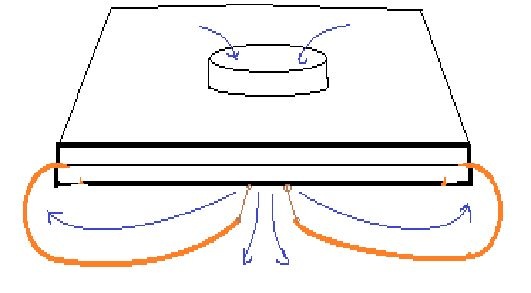 Congratulations! Your hovercraft is almost ready to race. Still, there are some imported modifications to make.

Probably, when you test your hovercraft. The skirt will be dragged on the ground, and the hovercraft won't go fast. To solve this problem, I've made a little modification. I attached some strings to the holes in the skirt. The other side of the string I taped down to the bottom of the base foam-board. By doing this you are creating an open area of air under the hovercraft. The air will escape from this area and the hovercraft will float. There won't be any friction anymore.

You can also make some more little holes in the skirt. For example, make some more holes at the back, if the back is the most heavy part of the hovercraft.

Lastly, you can cover the front of the hovercraft (where the battery is placed) with extra pieces of foam. It looks better and it improves the aerodynamics.
Powered by